Photo by Oleg Magni on Pexels.com

When I grew up in Northeastern Ohio, my birthday came in the spring —  real spring. This business about three months of spring is absurd. In Ohio, spring lasts about three weeks — the time from the first onion grass, crocuses, and daffodils shoot green through bare black dirt, through the greening of the willow switches, the white exploding dogwoods and cherry blossoms, till at last, every tree’s gold and red has turned dark green — that takes three weeks. And, square in the middle of nature’s renewal comes my birthday. At the age of nine — now more than sixty-five years ago — it seemed so lucky — yet, so right that this my birthday fell in the springtime! Perfect.

The only thing more perfect would be having Jennifer come to my birthday party. Jennifer! Her family, Gunnerson, was from Scandinavia and she looked it. Long, light blond hair, deep sky blue eyes, pale white skin. Best of all, she liked me — kind of. I lived nearly a world away from her — three blocks — but luckily she lived on the way to David Hill Elementary School so I could walk part-way to school with her. We could continue up residential Davies Street, littered with maple-seed helicopters, or cut over to Archwood. Urbane Archwood Street held the branch public library and even a filling station.

Mom had promised me a party this birthday and I could invite whoever I wanted. Or, so she said. Actually, her friend from the bridge club had two daughters that I definitely did not want to come to my party, but my mother, of all things, had promised that they could come. Really! Imagine! I never told her she had to invite Jennifer’s mother to her bridge club! Actually, it wouldn’t have been a bad idea, but I didn’t think of it at the time.

No matter, so long as I could get Jennifer to my party. The tricky part was — how to get her there. Of course, you might think: “Well, hey, why not ask her?”

You might think that if you were born in New York or California or have forgotten what it’s like to be a nine year old boy totally overwhelmed by the goddess beauty of a nine year old girl. No, just walking up and asking her was definitely not an option.

Photo by Alex Fu on Pexels.com

Instead, I hit on a brilliant idea, bound to succeed. I made a newspaper. It had three or four articles on the front page and three or four more articles on the back page. It only took me one week-end to make. And there, right on the back of page two, in the lower right hand corner was the story of my upcoming birthday party, complete with a list of invitees. That list included Jennifer!

Now, for part two of my foolproof plan! The very next day, I contrived to walk home from school in front of Jennifer. I slowed down till she was only twenty paces behind me and “accidentally” dropped my newspaper. I continued to walk, but held my breath, heart racing. Soon, I heard the soft, bell-tones of her voice call out that I had dropped my paper. Yes! She handed it to me. I dully muttered “thanks,” as I stared into those infinite blue eyes for a clue.

Hadn’t she read it? Hadn’t she seen her name right there on page two? Was she blind, and I didn’t know?

I scurried on ahead. Maybe she just hadn’t noticed. I dropped my paper again. Again, I heard her call out my name! She had seen me drop the paper. I waited for her to catch up with me. She handed me the paper. I swallowed hard. I looked in her eyes. She looked at me. I said, “Well…did you read it?”

“Oh,” I said, and turned, crimson glowing hot on my cheeks.

I thought about dropping my paper a third time, but what was the point? She took it as an invasion of privacy to read my private paper. I’d have to come up with something else.

I got pneumonia and the party was canceled. I did get a record and a book as presents from my mother’s friend’s two daughters but I didn’t read the book or listen to the record. It wouldn’t be … right.

The next year, my parents moved to a new house and a new school district and I never saw Jennifer again. Except in dreams. Where her blond hair is still blond and her young smooth skin is still flawless. And, spring — spring lasts forever. 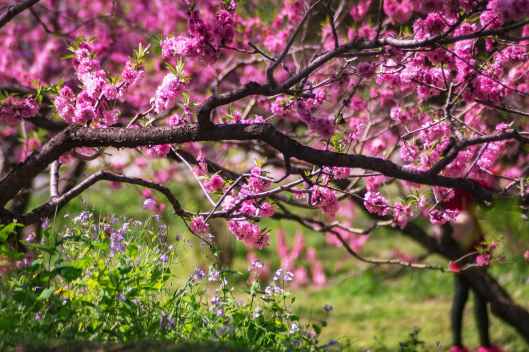 Photo by zhang kaiyv on Pexels.com