The Unstrung Bow & The Unsteady Arrow of the Cruel

Tu-Swift discovered that waiting, just waiting, can often prove more difficult even than a hand-blistering day of shoveling horse manure. He returned to his training. “Inventory” he whispered to himself. After recalling everything about himself, his surroundings, Day-Nah, and the circumstances, he carefully went over the plans, if he might even call them that. He wished he had a weapon. His small sharp stone was no match for their odd looking bows, all of which they methodically hung up in a row on the outside of a building next to the barn, their strings dangling. Beneath each bow, a quiver of arrows stood upright on the pounded dirt. Tu-Swift’s brow furrowed as a strange thought came to edge of his mind. He nearly swatted it away as reflexively as he might swat away an annoying fly.

Like all the Veritas, he had been taught that theft, like every manifestation of greed, was wrong-headed. It would be feeding the “bad wolf” within himself. He would never steal from another of the Veritas. But these people who stood atop horses had stolen him. And, he suspected, that they had also stolen Day-Nah. So, maybe stealing some of their bows would be….It took a lot of work and effort to make a good bow; this he knew from personal experience. But to steal a person from their family, from their tribe? Surely that was far worse. Those bows, along with the arrows, had been loosed upon his tribe. On the other hand, trying to carry several dozen bows would be too awkward when trying to escape. He dug out his hard, small stone and turned it over in his hand. Tu-Swift chuckled inwardly. “You are not much of a weapon, little stone, but perhaps you can defeat a stronger one.” He thought he would try to manage stealing three of the bows and a quiver of arrows. 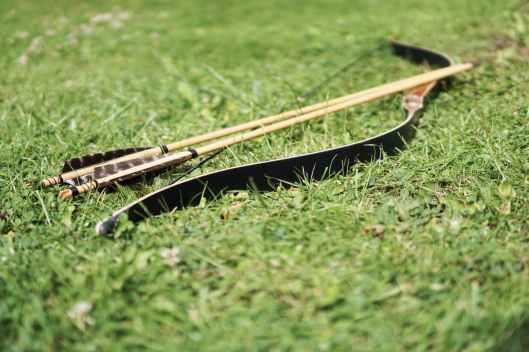 Tu-Swift looked out into the dark, silent, and empty courtyard of the Center Place of the child-stealers. He heard no-one stirring about. He could hear the noises, faint and distant, of the horses nickering and of people snoring, but he could not detect any footsteps. He signaled Day-Nah to stay close and to stay quiet. Despite his young age, Day-Nah was quite adept at being careful and quiet. Careful to slink along in the shadows, they slowly made their way toward the paddock, from stump, to shed, to bush, always seeking some way to stay hidden in the darkness. Now, however, to get to the hanging bows, he would have to venture into open ground. If one of the guards saw him, they would raise an alarm. Others might think he was simply a youth on his way to relieve himself.

He grabbed a handful of the bows and brought them into the vacant log building. He inserted his thin stone knife into the nock at the bottom of an unstrung bow and twisted. The nock snapped just as he had hoped. He worked as quickly as he could. After disabling the bows, he gestured for Day-Nah to stay inside while Tu-Swift ventured back outside to gather another armful of bows and quivers. He quickly snuck back inside and repeated the process. This time however, instead of completely breaking off the nock, he cracked it enough, as best he could judge, that attempting to string the bow would finish the job.

By being so organized, he reflected, these child-stealers had made themselves more vulnerable. That seemed odd, but Tu-Swift did not follow that path and instead looked about in the dim light for a place to hide arrows. Working quickly, he placed most of the arrows underfoot and bent them up enough to crack them without severing them.

Although concentrating on breaking as many arrows as he could, he realized that this place was quite unlike anything among the Veritas. Nothing in this place seemed round and living. It all looked hard and sharp even in the semi-darkness. He whispered softly and gestured to Day-Nah making him to understand that he was to hide these bows and arrows. He went outside and gathered the rest of the bows and arrows. As he did so, he could perceive a slight glow on the horizon. The moon was about to rise! 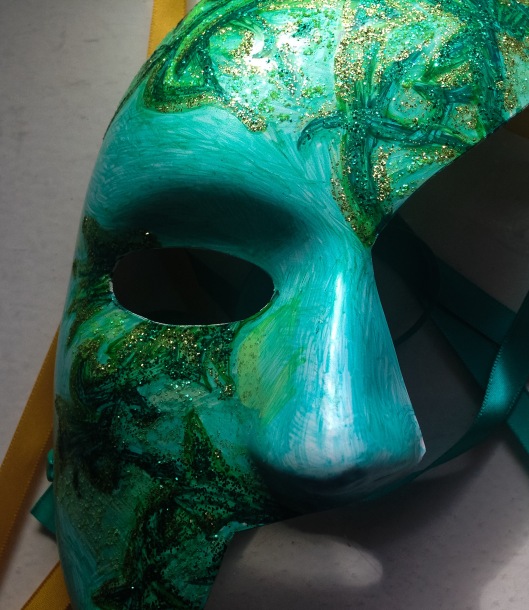 He went back inside and slung the arrows around the odd room, stomped on all the quivers, save one which he saved for himself. Then, he made Day-Nah understand that he needed now to be very quiet. He took his hand and they peered out into the courtyard. Still no-one appeared. Why were there no sentries? Did these people who stole children not suppose someone would come to rescue him? Another thought for another day. The moonlight now showed itself in patches between deep shadows as they padded their way to the meadow where the horses and mares were near each other though separated.

Tu-Swift picked up two sticks from the woodpile and banged them together, trying to sound as much like a woodpecker as he could. “We are with the horses in the meadow. I am about to set them free on your signal.”

Immediately, he heard another “woodpecker” answer: “We are here. Set them free. Then run to our sound.”

He and Day-Nah went over to the small new pens that Tu-Swift had constructed to separate the foals and mares. He pulled out a few rails of wood and the foals were now free to go. The foals however did not seem to notice, instead sticking close to their mothers. Tu-Swift again cautioned Day-Nah to remain quiet. He saw shadowy figures emerge from the nearby grove of firs and they began dismantling the fence. A flash of moonlight happened to fall on the face of Shadow Walker and Tu-Swift could barely contain a cry of joy from escaping his throat.

The horses had been nickering nervously from the smell of so many unknown humans, but now a few began rearing up and pawing the air. In so doing, they discovered that their feet were no longer strongly tethered. The mares whinnied and reunited through the broken fences with their foals. Tu-Swift then heard a wonderful sound – the sound of Shadow Walker saying it was time to join up. He grabbed Day-Nah’s hand and they ran toward the fir grove. The horses seemed to be scattering everywhere.

As they ran into fir grove, he could hear yelling and many footsteps back in the main courtyard. Although he had learned almost nothing of the language of those who steal children, he could tell from the frustration in the voices that the warriors of those who steal children began to discover that their bows were not in their proper place. Better yet, they began screaming accusations at each other rather than searching for their lost weapons.

The Veritas party proceeded quickly through the fir grove through the trail that they had marked. Shadow Walker bore Day-Nah on his back. After running quickly for a time, Shadow Walker put up his hand and they all stopped to listen. They could hear a great many voices – the tribe who steals children sounded much like a broken hive of bees. Shadow Walker stood Day-Nah on the ground for a moment. Shadow Walker bent and put his hands on his knees to help catch his breath. He lifted his head and caught the eye of Day-Nah who said in heavily accented Veritas, “I run” and he used his hand to gesture a run, scissoring his fingers back and forth as Tu-Swift had done. Shadow Walker looked at the boys wide dark eyes and nodded.

Now, the rescuers and the two boys jogged at an easier pace for nearly two hours, circling part-way around the stronghold of the tribe who steals children and back toward the home of the Veritas. Just before dawn, quite exhausted, after clambering up a fairly steep hill, they sat down to rest and stretch for a moment. Eagle Eyes scanned the horizon for pursuers but listened intently as Tu-Swift quickly recounted what he knew of this tribe who perches atop horses and steals children from their families. The boy spoke so quickly that Eagle Eyes had trouble understanding, but Hudah Salah appeared to follow the tale without difficulty.

1 thought on “Unstrung Bow & Unsteady Arrow of the Cruel”