Brain G. Gollek found the maze of humming silver wires unnerving. “There has to be a way out, dammit.” He twisted his no longer athletic body this way and that, but no matter what way he tried, he became more ensnared. He recalled flashes from giant spider horror movies. How did the dwarves escape? Wasn’t it Gollum with a magic ring? But Brain didn’t have a magic ring. If his sister Gonerillia were here, she could save him. But she was off in Hawaii, so she said, with her hubbie. “How the hell did I end up here?” wondered Brain.

Brain may have forgotten, but the viewers had been filled in on the backstory. If Brain could have seen the ratings, he may have at least enjoyed knowing that he was enjoying his fifteen minutes of fame. While the ratings were quite “favorable”, the twitter feeds mostly mocked Brain’s almost total lack of flexibility, mental as well as physical. As in life prior to the show, his only strategies seemed to be trying the same thing over and over and then blaming others for his failures.

“Mom, why doesn’t he just try something different?” Ida was having a tough time understanding Brain’s apparent lack of flexibility.

“Remember, Ida, Brain was “educated” if you can call it that, before the singularity. He mostly just memorized the answers that his teachers wanted him to give. And half the time, he skipped school to smoke cigarettes and …well…do illegal activities with his girlfriend, Lin.

“Okay, but he has had years and years since then to grow up and learn some new strategies.”

“Yes. Well. It’s complicated. Before the singularity, there were people who preyed on the fear and inadequacy of people like Brain by telling them all their troubles were due to minorities, immigrants, gays, and —- basically anyone unlike them. So, people like Brain felt entitled not to have to learn anything new even though opportunities abounded.”

Indeed, Brain’s behavioral repertoire seemed laughingly limited. His increasingly loud swear words reflected his increasing anger, but otherwise, not much seemed different. The ratings began to plummet as the audience began to grow bored with his display of functional fixedness. The themes of the twitter streams began to turn away from Brain’s lack of metacognition to more general reflections about the current instantiation of the criminal justice system.

#SingularityRules. More mercy in one last chance to change than lengthy prison terms. Cheaper too.

The audience dwindled still further as it became increasingly clear that Brain would never figure this out. Those few who still watched consisted mostly of people who themselves came from highly divided families and the conversation topics swung to the backstory.

#ElderFraud. #RottenKid. How could Brain have gotten pleasure from driving a wedge of lies between father and daughter?

#ElderFraud. #Dog&Bone. Brain cannot count. Trivial gains from lies. He did not know he was being watched?

Ida continued to stare, fascinated. A yawn escaped her mother’s mouth, but she kept watching with her daughter. The lessons seemed important to Ida.

“Mom, how much longer does he have?”

“That’s hard to say, darling. Even The Sing cannot predict the ratings drop perfectly. But, as you know, once it falls below, 5%, his time will be up.”

“That seems so much more merciful than making him go to prison for years.”

“Yes, Ida, and much cheaper as well.”

“But I still don’t get it. Didn’t he know that The Sing would be listening to his lies and analyzing the impact on his dad’s behavior and all? How did this Brain character think he could get away with it?”

“I don’t know. These kinds of crimes are pretty rare now, but they still happen.”

“And, why did Lear G. Gollek fall for his nonsense anyway? That’s the other mystery.”

“Well, he refused the stem cell regeneration therapy so, you know, he was pretty damaged when all this went down.”

“Can we change the channel to something more interesting now?”

As they changed the channel, the ratings dropped to 4.999% and Brain’s life snuffed out minus the merest shred of insight. 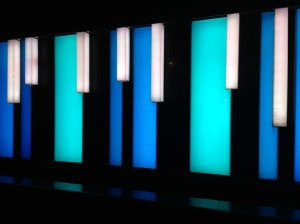 1 thought on “Turing’s Nightmares: A Maze in Grace.”