Eagle Eyes suddenly put her hand up thus silencing Tu-Swift in his recounting. She pointed to a spot on the horizon. The others stared but saw nothing. She made the sign for “fire” and then pointed to another spot and again made the sign for “fire.” The sun now began to rise behind them but shadows still obscured the valley between their small party and the people who steal children. A cool breeze freshened behind their backs. The wolves would not be able to catch a scent if they were being pursued. All of the party trained their eyes on the places where Eagle Eyes pointed but nothing appeared to them. They stared into the valley below: grassland, scrubby trees, and on one side a forest of conifers. On the other side, another forest bordered with birches and aspens.

Photo by Brandon Montrone on Pexels.com

The wind, they knew would carry their voices as well as their scent so they deliberated in quiet. If they stood their ground here atop the hill, they would have some advantage in a fight. If their enemy approached on horses, they would not be able to outrun them. They might be better off to stay and fight from the high ground. Tu-Swift shot his hand out and nodded vigorously, making the sign for “fire.” He too saw these flashes of flames. Soon, the others detected these fires that multiplied and flickered in the nearby woods. Shadow Walker, Fleet of Foot, and Lion Slayer each strung one of the bows that Tu-Swift had stolen and lay arrows beside them, ready to shoot when the time came.

A hail of flaming arrows suddenly streamed toward them. Shadow Walker laughed. What a terrible aim they had, he thought to himself for he could see that the arrows would fall well behind them. Lion Slayer saw this as well, but he yelled at the others to run and follow him. “Fire!” he screamed and began to run down the hill away from the forest of evergreens toward the birches. Shadow Walker frowned for a moment thinking Lion Slayer a coward not to stand and fight. A jumble of thought-images flickered through his mind: Lion Slayer, lion, a lion slain, a fire, The Legend of the Orange Man and then he understood and urged everyone to follow. 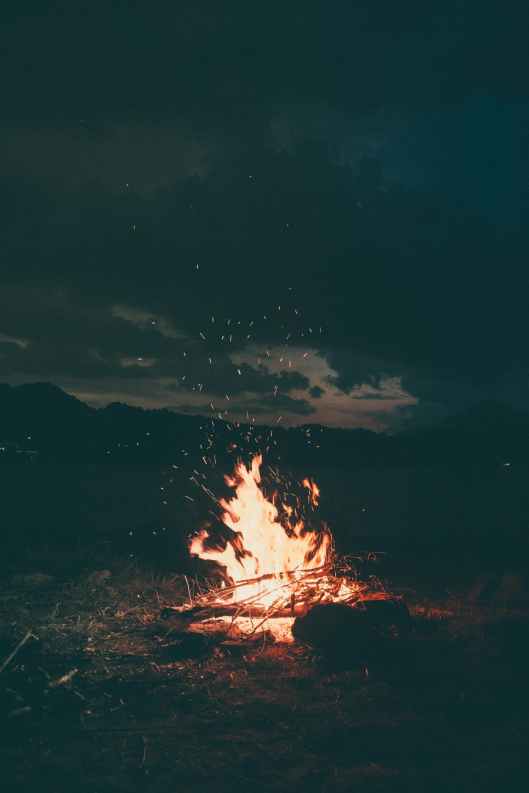 Photo by Vlad Bagacian on Pexels.com

Shadow Walker understood that their enemy had not aimed at them but at the grassy expanse behind them. Even now, fire took hold in the dry grass and burned quickly up the hill behind them. Lion Slayer realized immediately that running away from the evergreen forest was their only hope. The entire party now ran headlong down the side of the hill away from the forest. Shadow Walker glanced back and could see their pursuers now emerging from the edge of the forest. He saw that they were not atop horses. Perhaps they could out run both them and the fire, but if they loosed another volley of arrows they could start a new fire. He stopped for a moment, turned back and picked up the small friend of Tu-Swift who was falling behind.

It seemed to Shadow Walker that fire now roared all around them. Thick black smoke hid each from the others and they continued their descent, running blind. Shadow Walker’s foot landed on a loose rock and he fell heavily while Day-Nah flew off his back and tumbled away from him.  The fire seemed to suck life out of the air around them. Shadow Walker crouched on all fours attempting to catch his breath. He stood but saw no sign of the others. Flames surrounded him. He was disoriented and could see nothing and he heard no voices above the roaring flames. Wolves! He heard the wolf pups and, having no other beacon, ran toward the sound of their voices.

Shadow Walker’s feet suddenly splashed into cold water. He had come to a broad shallow river. Here, smoke hung still heavy in the air, but there were no flames surrounding him. A splash beside him made him spin around ready to kill but it was the small friend of Tu-Swift. Shadow Walker heard coughing and saw Hudah Salah splashing toward him. The air began to clear around them.

Wind is a fickle friend. Those who loose fire — or hatred — upon a land or a people, can never predict with certainly where those flames will lead. Fed by the fuel of fierce desire to destroy and flowing with the ever changing winds, foolish indeed are those who think these movements may be directed and channeled.

This day, the winds had shifted and the fire now pursued the pursuers and the fire burned toward the people who steal children. Though slower on the downhill side, it chased the ROI into the forest, but did not stop at the edge of the forest. Encouraged by the richer fuel within, the blaze now devoured its way back into the fir and pine. Another small fire had begun when one of the ROI had pulled back his lit arrow, and before he could release it, the weakened nock broke and the flaming arrow had fell at the bowman’s feet instantly igniting the grass around him. The breaking of the bow stung his arms and in his surprise, he ran into the forest rather than attempting to put out the small fire around him. Of course, it quickly grew and like his larger cousin, relished the change in wind that allowed him to charge into the fuel-rich forest. 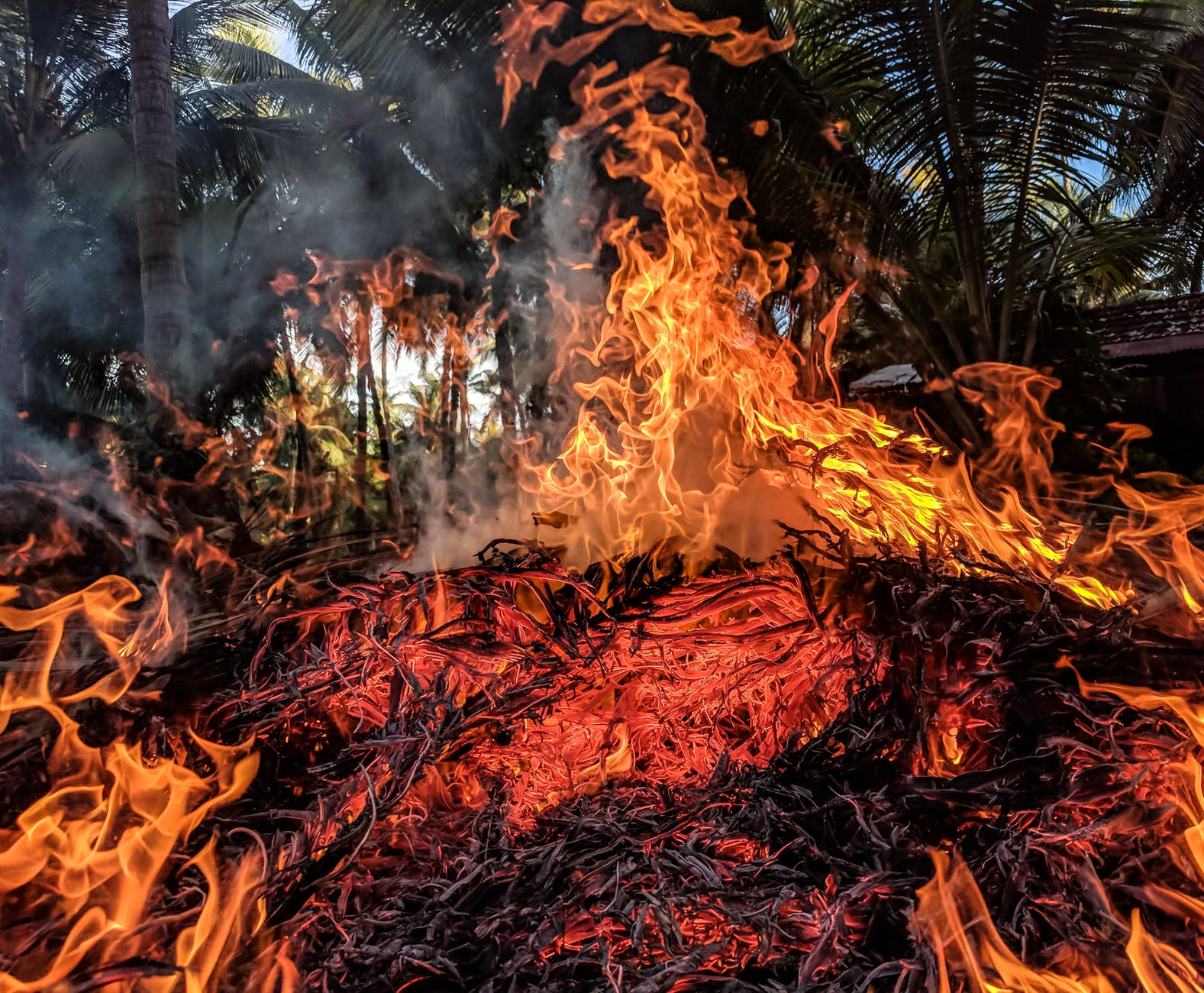 As the air cleared around Shadow Walker and Hudah Salah, the rescue party began to see that in the distance, a great fire was destroying the forest — and all the creatures within. Easy Tears soon joined them along with the wolf pups. Fleet-of-Foot and Day-Nah also joined them. The stream water was cold. Shadow Walker looked about. Though there was no immediate threat of fire, he knew that winds were unpredictable. If the wind shifted directly toward them, the fire would find nothing to burn. In front of him, in a direct line to the forest of firs, the entire grass hillside had been burned to ash. On the other side of the burned grassland, the evergreen forest bloomed red and black. Huge flames leapt to the sky. The fire seemed intent on burning back toward the center place of the people who stole children. But fire is unpredictable. It might then turn and come up the other side of the valley after them. But where was Tu-Swift? Where was Eagle Eyes? Where was Lion Slayer?

Shadow Walker began to realize that his ankle was badly sprained. He gestured the others to come to the edge of the stream to parley. That sat for a few moments in silence. Each of them had just barely escaped death, after all. No-one seemed badly burned or injured. But three of their party remained unaccounted for. Shadow Walker sat on the edge of the stream, shivering with the others, keeping his turned ankle in the icy water. He focused his energy on telling it not to swell. At last, he opened his mouth to speak, but the small thin voice of Day-Nah spoke first.

Shadow Walker almost choked up with tears. He cupped his hands around his mouth, gestured for the others to follow his lead and they all turned toward the center place of the ROI and shouted “TU-SWIFT!  TU-SWIFT!” Then, they cupped their hands behind their ears to amplify any returning call. Nothing. “Eagle Eyes! EAGLE EYES!” Nothing. They did the same for Lion Slayer. Nothing. Then, they all turned in a slightly different direction and did the same. They completed this circle twice with no response. The roaring, sparking fire was the only sure sound though on several occasions they all thought they heard screams of agony.

At last the sun shone over the peak of the hill; the smoke clouds no longer hid its warming rays and they began to parley on whether the people who steal children had survived to chase them further and whether and how and where to search for those missing from their party. Hudah Salah regarded Shadow Walker’s ankle with a grimace. She tore some of her garments and took his ankle gently into her lap where the wrapped cloth tightly about it and tied it. “Too tight – you loose. Too loose – you tight. Understand?”

Shadow Walker looked into her face. He could see genuine caring and concern and beyond that he saw her fear – that her husband, Lion Slayer might have been lost to the flames. This tore at the heart of Shadow Walker. He had come here to rescue Tu-Swift, who was nowhere to be found and he may have lost two of their party and still not returned Tu-Swift to Many Paths as he had promised. 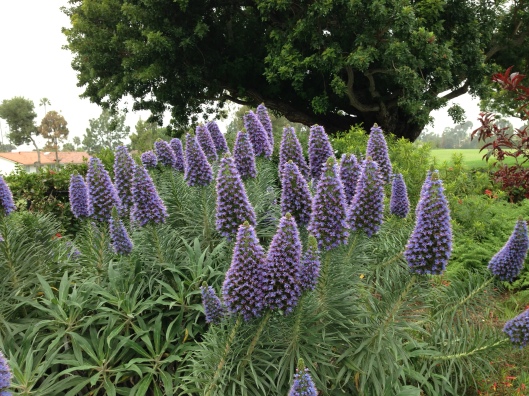 He stood at last, and hobbled a few steps. He would be of no use searching. They worked together to devise a search plan. They would communicate by alternating whistling like an eagle and drumming with sticks. If anyone saw a sign of the return of their pursuers, they would warn the others. If they met up with any of their missing party, they would likewise let the others know. They would meet back at the stream at sunset. Shadow Walker and Day-Nah would stay behind to relay messages and Shadow Walker would try to learn more from Day-Nah. Though Day-Nah’s ability to speak Veritas was limited, he hoped he could learn something, and he began to query the little fellow. “Tu-Swift? Where Tu-Swift?”

The child repeated back. “Tu-Swift! Tu-Swift — good!” This was followed by gibberish more unintelligible to him than the hissing of a snake. But Salah Hadam, who had just gathered up her pack, and headed off to search, snapped around. She spoke to the boy rapidly in some foreign tongue. They spoke excitedly back and forth for several minutes and the others also turned back. Fleet-of-Foot could stand it no longer.

“What is he saying? Is he of your tribe? Where is Tu-Swift?”

Salah Hadam, generally quite demure, put up her had as though to push away Fleet-of-Foot and looked him in the eye and said, “You. Stop! He talk!” She turned back to Day-Nah and they continued to converse. Shadow Walker had no idea what she said, but Fleet-of-Foot understood much of what they said. He stooped down beside Shadow Walker and spoke in a stage whisper.

“This boy does not know what happened to Tu-Swift. They were together running down the hill quickly to escape fire. Black smoke and fire everywhere. Tu-Swift had helped Day-Nah get up after you dropped him and had yelled, “Run, Day-Nah. RUN!”

“Day-Nah had looked over to see Tu-Swift but he saw nothing. He had vanished into smoke.”

Fleet-of-Foot realized that this conversation would continue for awhile and he set down his pack beside Salah Hadam and began translating as best he could to all the rest. One by one, the rescuers set down their packs and began listening to Day-Nah’s story.